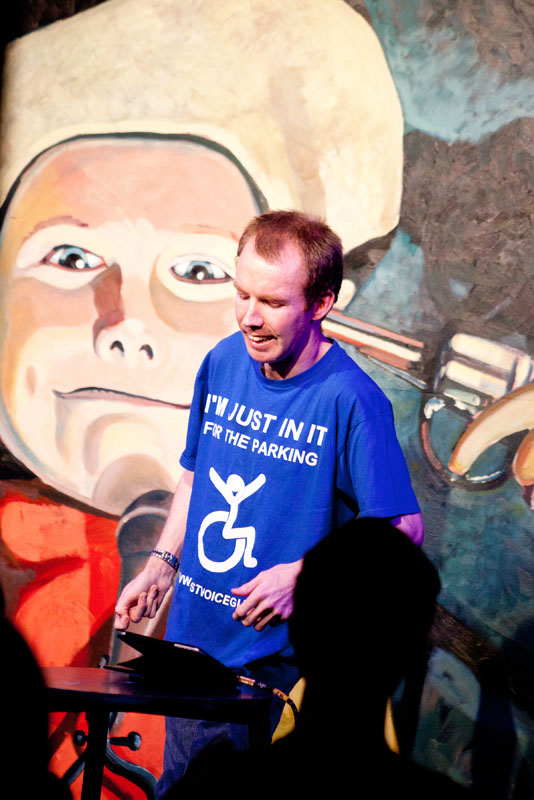 Lee Ridley aka Lost Voice Guy is a stand up comedian from Newcastle. He first spoke to MoodyComedy back in 2014 and has since produced multiple Edinburgh shows, written a radio sitcom and even recently auditioned for Britain’s Got Talent. I interviewed Lee about this growing list of successes and this is what he had to say…

Quite a lot actually! My life has become pretty busy, which is good. I’ve got a sitcom coming out on BBC Radio 4 called Ability. Ability is about a disabled guy who can be a bit of a dick at times. So, obviously it’s totally fictional and not based on myself at all! It follows the life of Matt (who uses a communication device to speak with… again purely coincidental!). He has recently moved out of home to live with his best mate, Jess, and also has a very dodgy carer called Bob, who visits him every day. What possibly could go wrong?! It’s due to start being broadcast on BBC Radio 4 at 11.30am on Wednesday 2 May. Then, I’m taking my show – Inspiration Porn – to the Edinburgh Fringe in August as well. Oh, and I’ve just auditioned for Britain’s Got Talent!

For those who don’t know you, what is your comedy all about?

Basically, as I’m unable to speak, I use an iPad to tell my jokes on stage. Hence the name Lost Voice Guy. Mainly my material is just taking the piss out of myself and my disability. I’ve always being able to see the funny side of my condition. So this is just like free therapy for me!

What made you decide to audition for this year’s series of Britain’s Got Talent? Was it a difficult decision?

I’m doing Britain’s Got Talent because I enjoy performing and I think this will be a great opportunity for me to grow both as a performer and a person. I’d also like to prove that disabled people are just like everyone else, and are allowed to have a sense of humour.

Which judge did you most want to impress?

Simon, obviously. Then I might get a ride in his private jet!

What do you hope to get out of your Britain’s Got Talent experience?

Obviously I’m hoping to go as far as possible but, at the same time, I’m just enjoying the experience and seeing where it takes me. I think it’s more important to have fun than to have any great expectations.

Have you had positive responses from any disability charities since your appearance on the show?

Yes, all the charities that I am involved with have been very supportive since I was on the show. In fact, the response from people in general has been a bit breathtaking. My phone has never stopped since with people congratulating me and stuff. It’s all a bit surreal!

You’re a big supporter of various charities, can you tell us a little more about the ones that are closest to you?

What are you most excited about right now?

My Radio Four sitcom which starts this week! I had the time of my life recording it, so I hope the listeners love it as well. 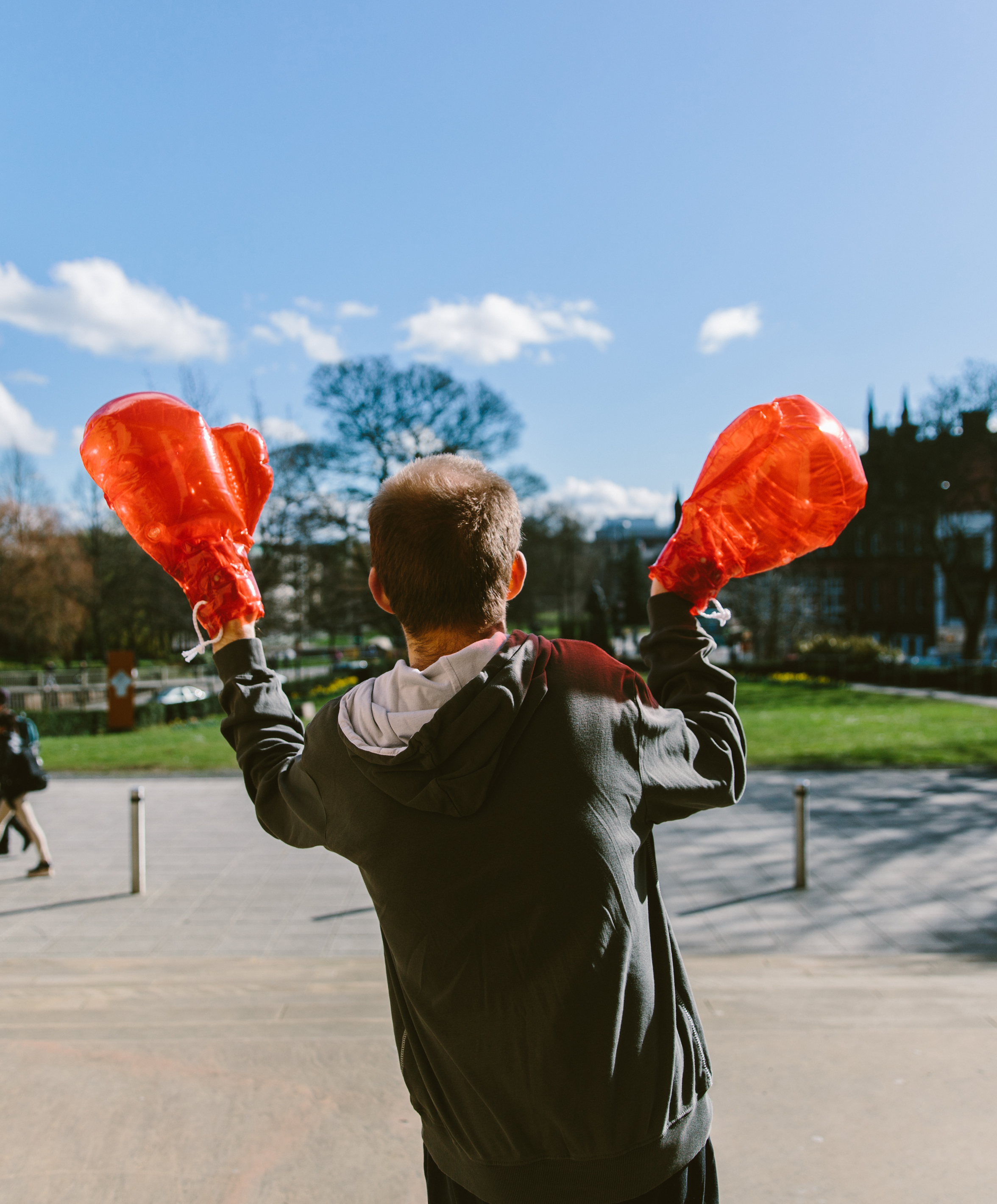 Lee Ridley, aka Lost Voice Guy, has cerebral palsy, which for him means he has a lack of speech. From a comedy point of view, this has allowed him to confront the stigma surrounding disability from an angle that is far more interesting for audiences to see. His blasé approach to the attitudes of others towards his disability, teamed with his dark sense of humour, makes for a deliciously funny combination. Lee is performing at The Stand throughout August.

I think the thing I actually enjoy most about the festival is the fact that I get to hang out with all my comedy mates for a month. Because you only see each other every few months on the circuit, it’s pretty nice to have everyone all in one place for a change! I know I should probably say that the thought of performing to hundreds of people excites me, and of course it does, but I enjoy the social side of the festival just as much.

My first ever Edinburgh show was called Voice Of Choice, and it was basically a biographical show about my life so far, and how I ended up being a comedian despite not being able to speak. That was five years ago but I’m still quite proud of the show.

I’m not sure really. Because I’m disabled and I talk about disability issues a lot, I do think that I get a lot of disabled people coming to my gigs (if they can access the venue anyway…). But other than that, I haven’t really noticed a certain type of person turning up. I seem to attract all sorts, which I think is a good thing.

It might not be strictly to do with Edinburgh accommodation in the normal sense, but I was stuck in a hospital bed for three weeks during my first year at the Fringe. Basically I got pneumonia about two weeks into my run so I had to stay in an Edinburgh hospital bed while everyone else was packing up and going home. That was quite a nightmare!

It would have to be when I supported Ross Noble at The Stand in Newcastle. Not only is Ross my comedy idol, but Newcastle’s Stand is my favourite venue to play. So to have both of those things together was awesome. It was definitely a dream come true.

I’m a massive fan of Gein’s Family Giftshop so I’m looking forward to seeing what they have in store for us this year. Hopefully it’ll be something very dark and very wrong.

I think a better question would be what would I hope not to lose. I’d quite like not to lose thousands of pounds, but I doubt I’ll get that wish! To be fair, I’m with The Stand who really look after their acts, so it isn’t as bad as it could be. If I can break even I’ll be very happy.

Imagine if medicine had advanced so much that they actually found a way to give me my voice back, and my last show was just me telling jokes with my own voice like any other comedian. That would be both amazing and devastating at the same time. I mean I’d be able to talk, but I wouldn’t have an unique selling point anymore!

Lee Ridley, aka Lost Voice Guy, is a funny man with a unique comic voice: being that he literally has none. Lee relies on an iPad to communicate with his audiences, due to losing his speech as a child, which allows a completely different style of comedy gig to take place, and one that everybody should experience. With his light-hearted attitude towards his disability, Lee is working to end the stigma that is attached to such physical conditions while being a right laugh as he does so.

In order to find out a bit more about Lee, I asked him these seven questions…

1) Describe the strangest dream you’ve ever had?

I have strange dreams quite often actually. I’m not sure why. I can hardly remember any of them though. The only ones I can recall are the ones when I talk in my sleep and wake up with a load of random shit written on my iPad. I woke up once and found that I had written ‘but the Queen told me to do it’ so I’m guessing that was quite a weird dream.

2) In your opinion, what is the biggest disgrace to humanity?

Mrs Brown’s Boys, without doubt. I mean why? Why? WHY?! Why does it exist? What is it’s purpose? Is it supposed to be funny? Why does everyone seem to like it? Why does it make loads of money? It’s shit, isn’t it? Isn’t it?!!!!!!

3) Worst on-stage experience you’ve ever had?

A lot of comics suffer from stage fright but I’m not one of those. I’m more likely to suffer from a dead battery or the electricity going off. I suppose one of the worst on stage experiences was in Halifax when this woman stormed out of the room as I got on stage and said ‘oh I can’t watch this!’ I didn’t even think I was that ugly!

Just three?! That’s really hard! Ash would be my first choice. I’ve always loved Ash since their 1977 album. I’d probably have the Manic Street Preachers as well but I’d make it clear to them that they had to only play their classics. Then I’d bring Michael Jackson back because he still owes me a gig from his London shows that got cancelled. Selfish bastard.

5) What ice cream flavour doesn’t exist, but should?

Monkey flavour ice cream. Because then you could ask for monkey’s blood to get put on top of it and it’d be so much more realistic as an experience. I doubt monkeys taste good though. I’ve never tried.

6) Other than humans, what is the most irritating animal on the planet?

Sheep. They’re constantly ruining my train journeys to gigs by standing on the train line. I mea 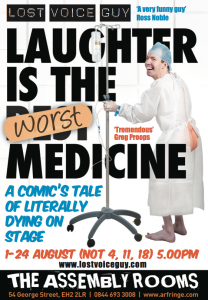 n I don’t know why we can’t just run them over?! Maybe they’re trying to commit suicide anyway. They’re probably wondering why they never succeed.

7) Who is your comedy hero?

I always say Ross Noble so, for a change, I’m going to say The League Of Gentlemen. For everything they have made. I just love how dark and twisted they can get. It’s definitely my sort of humour. I just seem to adore everything they do. And I still want to go to the actual town which was made into Royston Vasey. I’d just go around shouting catchphrases from the show.