Taskmaster is the brainchild of comedy heavyweight Alex Horne, recognisable to many as the front man of the Horne Section and occasional appearances on Friday night television on shows such Cats Does Countdown. Alex Horne is a comedian who knows how to make the Edinburgh Festival exciting; for fifteen years he has been delighting crowds with whacky conceptual shows and experimental games, with an admirably positive attitude when it comes to testing these extravagant possibilities. He is not afraid to push the boundaries and this gives Horne a fantastic creative advantage.

Taskmaster began as a year-long competition with comedians (and sometimes critics) being pitted against each other in a set of bizarre challenges, with Horne hosting and Mike Wozniak as his trusty assistant in recent times. Now the game has been given a new medium, a risk for a television channel (though perhaps not for Dave, which is already renowned for its experimental nature) and no doubt a delight for countless comedy fans. The television adaptation of the game is hosted by Greg Davies and Alex Horne and has a regular group of contestants, which binds the show together well and allows a sense of camaraderie to build as the episodes progress and the responses to tasks to become slightly more competent and imaginative. The comedians are diverse in their background, audiences and generations, making the whole programme feel accessible to a larger audience, with the five contestants being Frank Skinner, Josh Widdicombe, Roisin Conaty, Romesh Ranganathan and Tim Key. 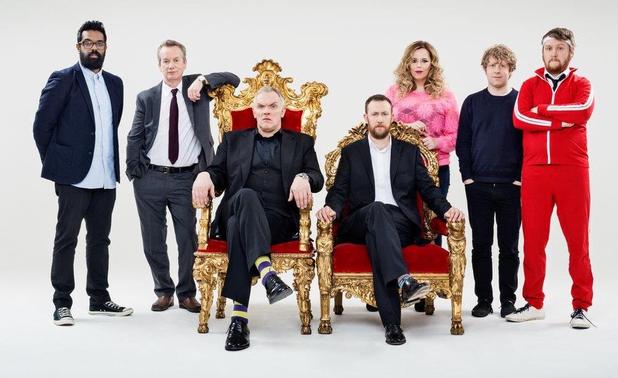 It is fascinating to watch the contestants figure out the best way to approach obstacles, particularly in group tasks where the thought processes are made vocal, but this perhaps makes them less constructive as opposed to when certain individuals are allowed to work on their own. As the series develops it becomes clear that the comics excel in varying areas. Take Roisin Conaty as an example: hopelessly slow at carving up a watermelon but a high-flyer in any rounds that require social skills, such as the task involving high-fiving a 55 year old member of the public. If you want canny solutions to problems that bend the rules, sometimes to the point of breaking them completely, Tim Key is your man. Time and time again on Taskmaster Key proves himself to be a devious, quick-thinking non-conformist, shaking up the system so carefully crafted by Davies and Horne, with hilarious effects.

Greg Davies is fantastic; he’s harsh, loud and ridiculous, completely giddy with power, and the relationship between Davies and Horne is clearly a long-lived one. They find each other, and themselves, utterly hilarious and it’s not self-indulgent because they are absolutely right. The whole group act like children and it’s refreshing to see it contrast against a genuinely sharp wit from all players. It helps dramatically that the tasks are so varied, often absolutely mental and incredibly funny to see carried out. A highlight has to be poor Josh Widdicombe’s attempts at counting the number of beans in a can, of spaghetti hoops in a can, of grains of rice in a bag… All in vain, however, because nobody else was even set that task. Poor soul. But anyone would be hard pushed to pick a favourite moment when the likes of Romesh’s backwards film Tree Wizard and Roisin’s demands that Alex Horne eat a toothpaste pie are involved.

CATCH UP WITH SERIES ONE OF TASKMASTER ON DAVE NOW