At first glance BBC Three’s new sitcom Fleabag may give the illusion of being like any other modern day sitcom. A young, attractive but troubled lead with a turbulent love life, an uptight sister and a struggling small business; what more could writer and ‘Fleabag’ Phoebe Waller-Bridge bring to the table? But within the first episode the narrative is already swept in an interesting direction, with the suggestion of darker aspects to this person’s life than one might previously have assumed.

Beginning life as a one-woman Edinburgh show in 2013, Fleabag is a confessional tale of a young woman trying to succeed in her relationships, business ventures and in herself, but desperately treading water. Waller-Bridge’s writing is rude and provocative but refreshingly open and self-deprecating. Yes it is dark, and heavy at times, but this sitcom is undoubtedly really funny. The production itself is artistically daring in places, with dream and flashback sequences packing particular punch. And the coy looks to camera are a welcome release of tension for viewers, with Waller-Bridge’s knowing eye drawing us in for personal in-jokes that teach us more about her character, rather than serve as cheap laughs. 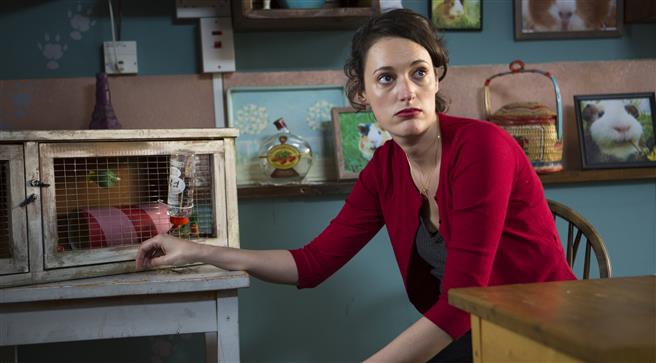 And the cast is not to be scoffed at either, with W1A‘s Hugh Skinner playing Fleabag’s intermittent boyfriend as well as Hugh Dennis as unsupportive bank manager and Olivia Colman as somewhat self-entitled step-mum. The small group of core characters are diversely peculiar, with each of their stresses manifesting in traits such as a limitation to the fluidity of their social skills or an avoidance of adult responsibilities.

There are plenty of laugh out loud moments provided by our star, drawn from her highly socially inappropriate sense of humour and an apparently uncontrollable mouth. But the issue at the heart of this unsettling comedy is one of great personal loss; whether that be the ongoing pain of having her mother die when she was young or the recent shock of losing her best friend in a horrific incident, Fleabag is coming to terms with her status in the world, and within her own disjointed family.

Fleabag is almost a comedy of errors; it is a narrative of social nonconformity: a depiction of a young woman struggling to accept herself, apparently terrified of real affection. Our almost-tragic lead is the receiver of everyone’s sympathy but does not often receive any genuine care. Disjointed, snappy and vibrant, Waller-Bridge’s Fleabag establishes itself very quickly before evolving into something else entirely; there are numerous moments in this programme that are absolutely exquisite.

FLEABAG IS AVAILABLE TO WATCH ON BBC IPLAYER