Everybody in Britain is well aware that there is a general election this week. At a time like this, it becomes increasingly difficult to avoid hearing and talking about politics. Yes, it’s depressing (well it is for me anyway, only accentuated by the fact I narrowly miss out on the chance to vote as I’m not eighteen until later in the year). But when something as important and inevitably dull as an election comes around, at least we are given something to help us make sense of it all, to vent our frustrations and to bring humour back into our daily lives. When times get tough, comedy takes a more prominent role in society. In 2015, we are experiencing a period rife with satirical comedy.

Newzoids has frequently been compared to Spitting Image, which seems fair as satirical puppetry isn’t something you see everyday (though many, no doubt, may wish it was). Spitting Image may just have been one of the most important comedy shows ever created, as it allowed the power to be placed back into the hands of those creating the programme; straight back into the hands of the public. But the last episode of Spitting Image aired in 1996 and there certainly is a gap that has never quite been filled. 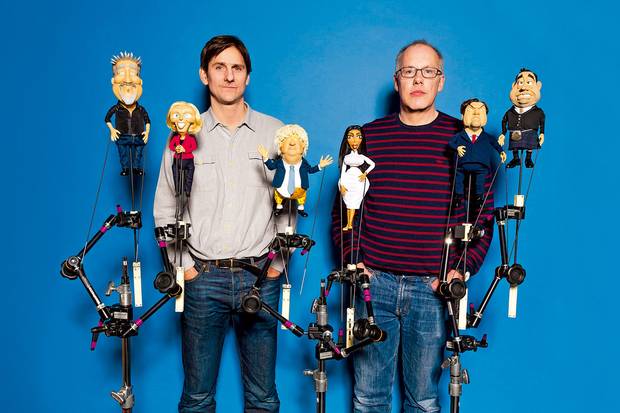 For all its similarities, I can’t help but feel that Newzoids is not the programme to fill the gap that Spitting Image left. There were elements that I really enjoyed, particularly the darker political material such as the UKIP song but there were frequent, and somewhat predictable, pop culture references. Plus, the puppets were nowhere near ugly enough. But that’s not to say that this new show doesn’t have promise or that I didn’t laugh out loud in places. The voices behind the characters should be familiar to us by now (Jon Culshaw and Debra Stephenson are responsible for a large proportion of them), and they are brilliant, as can be expected of such a talented cast.

In order to be topical, each episode of Newzoids is created days, and often mere hours, before broadcast (just like Spitting Image did back in the 80’s and 90’s). In this sense, there is an excitement factor as here we have a comedy that is able to cover immediately topical material, but, for once, it isn’t a panel show. There is undoubtedly an extensive amount of work that goes into the making of such a programme, and I appreciate that, but for my tastes, I would like to see a much darker satire (though this has been able to build over time as the format has been cemented). Perhaps what I really need is to go back and watch some more of Spitting Image. 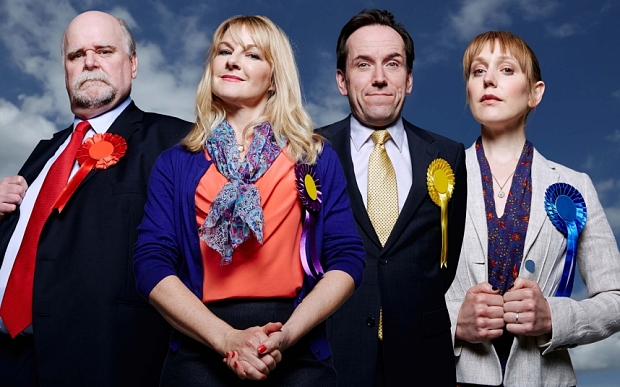 Ballot Monkeys takes an interesting perspective on the election as it follows various parliamentary candidates during the last weeks of their campaigns. With all scenes taking part inside the party buses, there is little to observe other than the people themselves, so we are given a stripped back representation of each party and their candidates. The results are strikingly accurate, with frequent digs and frequent laughs. Like Newzoids, this programme is filmed as close to broadcast as possible, often on the same day, which enables the material to remain relevant and limits the possibility of stale caricaturing that could sneak in if writers become complacent.

The cast is saturated with talent, with Ben Miller playing a Lib Dem campaign co-ordinator, Hugh Dennis as the Tory Deputy Campaign Manager and Sarah Hadland as a UKIP office support manager. The characters are diverse, with major and minor roles within the party covered by the likes of Uncle‘s Daisy Haggard and Esther Smith and Theo Barklem-Biggs (Crims). Andy Hamilton and Guy Jenkin have skilfully incorporated criticisms of politicians and our society in general such as the fact nobody in the Conservative bus listens to the female members of the team when they have something important to say.

In my opinion, creating and appreciating political comedy is vital in today’s society, so the response to this year’s election truly delights me and I hope the humour outlasts the politicians.