Last July, a trial-run series of a new chat show hosted by Alan Davies was broadcast on Dave, and frankly, I was over the moon. The programme aims to recreate the atmosphere of a green room at a comedy gig, inviting four guests for a chat with a minimal agenda. The format is truly up and running now and a full series was broadcast, starting in January.

With the series spanning ten episodes, and four guests each week, As Yet Untitled presents a large number of guests, comedians in particular, including some that we haven’t heard from in a while. The legendary Ricky Tomlinson (Royle Family) and writer Grace Dent both feature, as well as some true comedy greats including Sarah Millican, Ross Noble, Julian Clary and David Baddiel. 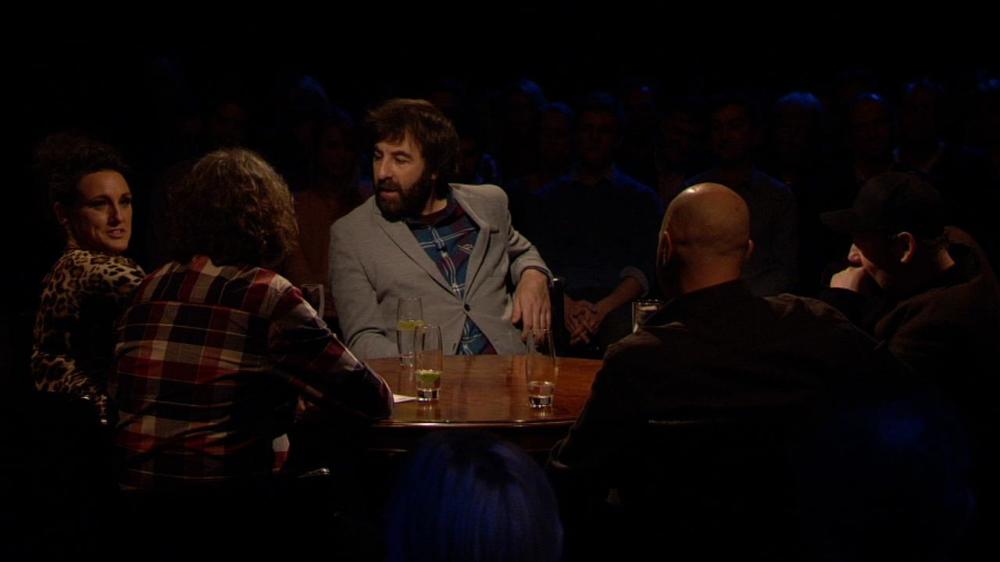 As Yet Untitled also promotes a new ‘wave’ of comedians that appear to be taking over the British comedy scene, including Nish Kumar, Angela Barnes, Elis James, James Acaster, Roisin Conaty and Tom Wrigglesworth. As this show grows it would be nice to see it gather more and more attention for the younger generation of comedians coming through which would help them get a solid grounding earlier on and enable audiences access to some incredible talent. It also features fantastic comedy talent from different parts of the world, some possibly making their debut on British television, including Aussie stand up Felicity Ward and Catastrophe‘s Rob Delaney.

The chat is often awkward and stunted in places, possibly due to editing, but this can be expected when a group of people who don’t necessarily know each other are asked to entertain themselves and a live audience; it can’t ever appear one hundred percent natural. In my opinion, this honesty add to the authenticity of the programme and also enables us to see another side to some comics that may have seemed (understandably) distant. Jimmy Carr especially appeared to settle into the informal atmosphere as the first episode wore on, showing a more natural side to him that his job, as panel show host in particular, hasn’t often allowed in the past. 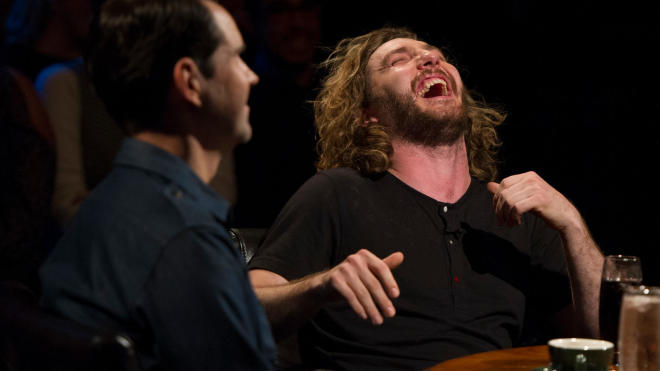 We also get to see a kind and sensitive side to Alan Davies that isn’t necessarily catered for in other panel shows purely due to the format. He shows himself to be very inclusive and supportive of all the guests, though it is hard to judge that when watching the televised cut, and is skilled at nurturing the conversation which seems to help all the guests relax into the strange format. The discussion is more structured this series, with each guest starting with a strange fact about themselves, or a suggestion of something obscure that once happened to them, and then taking their turn to explain in more detail. The transitions are occasionally disjointed, but often the guests are relaxed enough to continue the conversational feel despite a swift subject change.

I think we have a programme here that is very much a niche type of entertainment programme, but I hope its audience continues to grow as it truly is a very enjoyable and interesting watch.

CATCH UP WITH ALAN DAVIES: AS YET UNTITLED ON DAVE ON DEMAND OR ON YOUTUBE

A couple of weeks ago, the channel Dave broadcast five episodes of a wonderful new comedy chat show: As Yet Untitled. It was hosted by Alan Davies, ran over the course of one working week and featured four different comedians each episode. It has been said that this show was an attempt at recreating the feel of a comedy green room, with a relaxed atmosphere and a minimal agenda. Of course, I cannot truly know if it drew an accurate comparison as I haven’t been in such a situation myself, but I can say that a comfortable conversational feel was definitely present and I found the series incredibly enjoyable.

For a start, the physical set up was uniquely casual, with the four guests and Alan Davies (the host) sat around a circular table and the audience sat around them. The way the audience was situated had almost a Top Gear feel as you could always see them in shot, but they weren’t often involved in the proceedings. Each comic provided a strange fact about themselves to begin with which allowed the discussion to have some kind of initial direction but other than that, the show had a clean slate with the objective of deciding on a title for the episode at the end.

There was a danger with this loose format that conversation might not necessarily be free-flowing but this was expertly avoided by Davies who did an excellent job at steering clear of awkward pauses in discussion. In fact, the overall feel of the programme was very natural and chilled out which I thought was really nice. There was no pushing to have anyone’s voice heard over another person’s and everyone seemed very supportive of each other which is refreshing in comparison to the vibes you get from shows with more competitive, maybe harsher formats. An important impression I got from watching As Yet Untitled was that the attention was very much focussed on the stories and the people in the stories, and not so much on the comedians telling them. This meant that nobody appeared to be pushing particularly hard to be the funny one and in this way, I think the show definitely achieved its objective of seeming like a green room.

There were many funny anecdotes shared throughout the five episodes, including Bob Mortimer’s explanation of his and Vic Reeves’ comedy style, where in the early days, if the audience weren’t laughing, the double act would throw their shoes at them. We also heard the wonderful Katherine Ryan’s tale of the creepy inflatophiliac and Noel Fielding’s reason for disappearing from his own stand up tour (he ended up spending the day working in a vintage second-hand shop in Brighton, I mean, where else?). Bill Bailey’s account of his New Zealand airport kazoo confiscation was whimsical, as can be expected from Bailey and Phill Jupitus’ numerous celebrity impressions were spot on. Ross Noble’s tales about his accident-prone kids and Josie Long’s flawless diet plan were highlights of the final episode.

It was easy for the television audience to get carried away amongst all these hilarious anecdotes, which proves what an authentic mood there was, and every now and then I would remember how different the show actually is and feel really impressed at the smoothness of it all. At any point where a normal chat show may have become awkward, such as when they transition between topics or invite a special guest on, the conversation just continued on in the same fashion which shows integrity. The only flaw I could find, or perhaps the only stunted part of each episode, was trying to round it all off at the end. Of course, these would have been heavily edited to fit the time frame but the scramble to find a title could be done with more finesse in the future.

I adored this new show and the many guests on it; my favourites including Noel Fielding, Bob Mortimer, Katherine Ryan, Josie Long, Jason Byrne, Ross Noble, Bill Bailey and Marcus Brigstocke. I will be pretty annoyed if there aren’t more episodes made soon!