Jason Byrne arrived in Bromsgrove at 3pm on a Sunday afternoon, ready to perform to a relatively small crowd, more of a ‘group’ in Jason’s words. 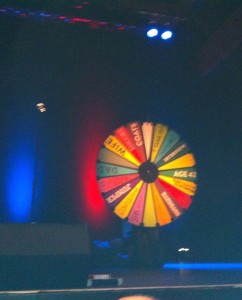 On stage stood a giant, colourful wheel that was full of interesting headings that seemed unsystematic but gave us a tiny smidgen of insight as to what was to come. Alongside it stood a whiteboard full of winning titles from each night of the show, from Aberdeen to Colchester and everywhere in between. Each title made no sense to today’s audience as it’s clear each show developed its own ‘in-jokes’ as they progressed. With this in mind, I had no idea how very cliquey our experience was to be, and how strange the people I was surrounded by actually were!

Jason moved around the space with ease. He spoke confidently and we could see that he obviously hugely enjoys what he does. We were assured that he’d never performed stand up at 3pm before, and we were well aware that we were making history (though weren’t sure as to what extent yet).

The show was kicked into gear relatively early on, with an orchestrated act of theft from a man on the front row who, under Jason’s command, stole an air freshener from the toilets. This was entertaining and a source of laughter, but was certainly how the comedian expected things to go. That was until a person went out to the foyer later on and returned with a bin, and then another who came back with a chair, and finally, a man who returned with a massive 6ft stand from reception full of leaflets and flyers which flew everywhere as a small group attempted to get it up on the stage. The scene was an absurd, leaflet-y carnage. 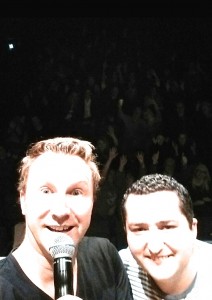 Jason, Chris, and a room of lunatics

There was a clear definition between material and crowd-work but it ended up that the majority of the show was unique to us, which was by no means a bad thing. Most of the biggest laughs came out of moments of madness from within the audience: such as the person known only as ‘Someone Else’ and the man who spends his days looking at monkeys. This new style of show allows each performance to be entirely incomparable and mean something different to each audience that watches it, whilst also demonstrating Byrne’s brilliant improvisation skills.

Byrne ended by individually thanking each person he had spoken to during the show; people seated here, there and everywhere. As result, and as opposed to my experience in October with the audience for James Acaster (though through no fault of his own), everyone was brought together in beautiful unison. This skilled comedian had managed to make a room full of strangers feel like a gathering of old friends; the atmosphere was electric and many laughs were had.

And that was ‘Three Chris’s, Half a Finger and a Monkey Fucker’. Thank you Jason, and thank you Bromsgrove.