Jason Byrne is the kind of comedian you can’t ignore. And that’s not solely because he’s stood up on the stage at Cardiff’s TramShed with a microphone. From the second Byrne bounds on to stage, he has his devoted audience like a ball of putty in his hand. There’s Nana who came last year who has baked him a box of Welsh cakes, and her entire family who the comic remembers immediately.

Quite fittingly then, Byrne’s new show, You Can Come In But Don’t Start Anything, is about family, childhood, and the values you acquire as a result of the way in which you are raised. Growing up as an 80s kid himself, Jason has his fair few ridiculous anecdotes to share, and he uses these as a comparison to his view of the way children are raised in 2018. He talks of being slapped by his mum, and jokes about being unassisted whilst choking on the toys hidden in boxes of cereal (both of which didn’t seem too far from my own childhood, despite having been born in the late 90s). The comparisons are quite distorted to fit the view that today’s children are being mollycoddled, but he gets away with it as he is such a charming and energetic performer. His faux-exasperation leads to hysteria, which leads to the biggest laughs. 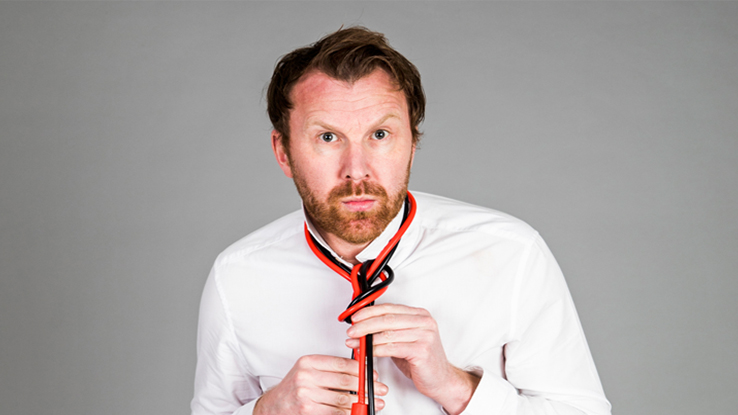 Jason Byrne: You Can Come In But Don’t Start Anything

But this comic is not trying to take the moral high ground here. In fact, in many of the anecdotes he shares he’s keen to paint himself as a ‘stupid man’ who’s occasionally moronic actions (such as taking nine magnesium tablets in one sitting) get no respect from his no-nonsense wife. Byrne is down to earth and not afraid to make a fool of himself, in fact, he seems to really enjoy it. And this drives home the clear fact that his amiability is his strongest quality.

He’s comfortable honing in on specific people in the room, having very natural discussions with audience members and remembering specific details about them to call back on later in the show. As ever with Jason Byrne, as he brings his whole audience together by chatting to different corners of the room, it becomes evident that each live show is a one-off, unique spectacle.

Jason Byrne is so likeable because he encourages his audience, however old or young, to be naughty and mischievous just like him. It’s clear that he could play even bigger rooms than this one, with this confident charm and apparent ease in front of an audience. Jason is currently his show, You Can Come In But Don’t Start Anything, across the UK and Ireland, and you can see the full list of dates here.