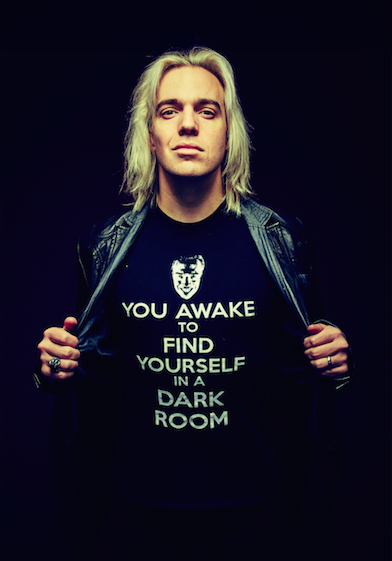 Australian comedian and writer John Robertson also has an interesting background as the creator of live-action video game, The Dark Room, where audiences are in control of the show’s outcome. Most of his time, however, is spent performing his peculiar brand of energetic, bordering on sadistic, stand up comedy. Robertson has recently announced new dates for The Dark Room as well as new international stand up dates.

To learn more about this unusual performer, I asked John these seven questions…

1) What was the inspiration behind The Dark Room?

Well, when I was 10, some pals and I found a computer in the storage area behind our classroom. There was a broken old text adventure on it – a game so horribly made that, whatever you did, it just killed you. It was the first time I’d ever seen a machine be nakedly hostile – and it stayed with me!

Also, given how much that sounds like the start of a young adult horror novel, the machine was cursed and now all my friends are dead.

2) Who is your favourite artist of any kind?

I’ve got an incredible love for folk singer Loudon Wainwright III, whose finest songs are war reports from a scarred family life, except for the really good one that’s just about swimming.

The following cluster of outstanding people: Mum, Jo, Jude, Wendy + Anthony, Mel, Tom, Nan Carol + David, all of whom will be pleased to be on this list and very surprised I didn’t just answer with, “Me”.

4) What are you currently looking forward to?

5) Do you find humour in inappropriate situations?

I find everything in inappropriate situations.

6) What is holding humanity back?

Lazy thinking, folks who are more interested in a fight than a solution, cocksuckers with bombs, anybody who uses religion to harm anyone else, state systems that reduce individuals to statistics, the Internet’s ability to allow angry shut-ins to gather and rub one another in their sticky opinons, a deliberate lack of education and the idea that millionaires know something because they’ve got a lot of money. They knew how to get that money, that doesn’t mean they know a damn thing about you.

7) What impression would you like your audience to have of you?

That I’m having a great time – and they can come along, too. Bring earplugs.

PURCHASE TICKETS TO SEE JOHN ROBERTSON AND FOR HIS LIVE-ACTION VIDEO GAME, THE DARK ROOM