In June 2014, a proposed magazine finally became a confirmed project as Stand & Deliver’s KickStarter campaign proved to be a huge success. Enough people (including myself) had pledged a donation towards the printing of the magazine’s first edition so the making and distributing of this beautiful product could get underway.

Stand & Deliver aims to fill the gap in the market for the comedy nerds of the world. It combines comedy, journalism, art and photography into one stunning package and I’m sure (well, I hope) that that is an exciting prospect for any reader of this site. One of the main reasons I supported this project was because the sheer amount of care, love and passion gone into it was painfully apparent. Seeing another person’s passion for what is most important to them in life will always, in turn, spark interest from me: I’m a big fan of hard work and effort. 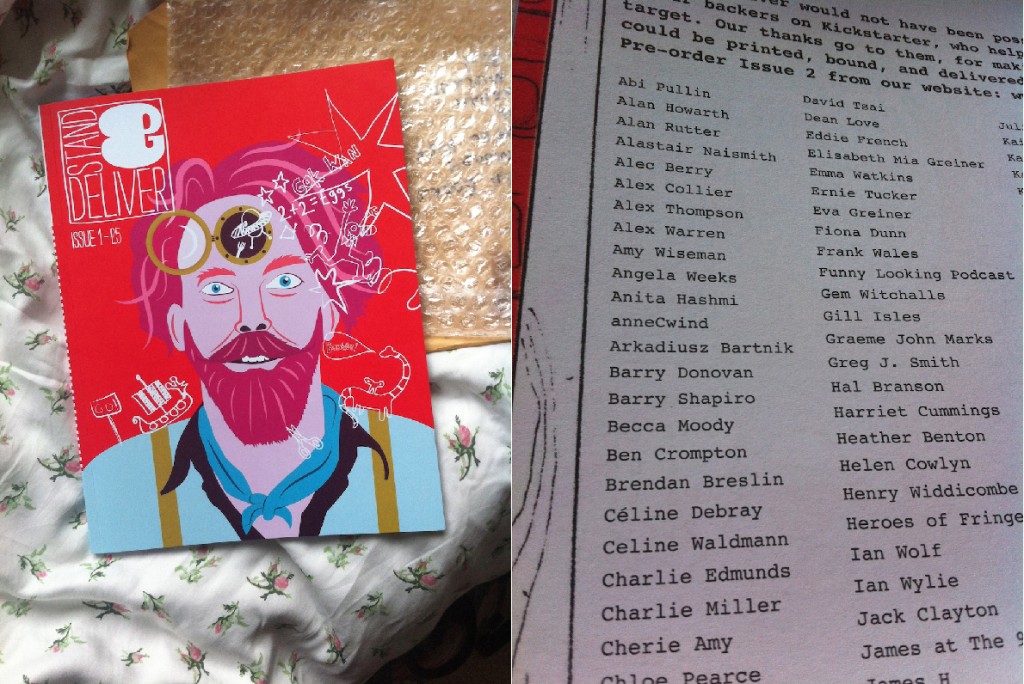 A page dedicated to all of Stand & Deliver’s supporters

As well as this, the magazine promises contributions from many of my favourite comedians and artists including Tony Law and Dave Brown in the first edition. I even spotted an article from last month’s Comedian Of The Month, Gavin Webster. That article in particular was of great interest to me, and really summed up what Stand & Deliver Magazine seems to be about: doing things for the love of doing them, namely: for the love of comedy.

Not only is the content of Stand & Deliver magazine made with care and innovation, the physicality of it is also of magnificent quality. The paper is strong and there’s so much of it that it’s more of a book than a magazine, and who doesn’t love a good book? Having read the first edition from cover to cover, I have already learned so much about obscure things like foreign comedy circuits, opinions on hecklers and my favourite: the Machynlleth Comedy Festival.

And finally, I would like to applaud the people at Stand & Deliver for their insanely hard work and can’t wait for next month’s copy to arrive! You can pick up your copy of the magazine here.

With August being the month of the Edinburgh Festival, even those of us stuck at home have been introduced to many new comedians through various television and radio shows covering events there. This month’s favourite comedian discovery, Gavin Webster, was one of those who was lucky enough to be able to perform on the TV show, Edinburgh Nights with Sue Perkins, and he did a very good job of it too.

What I liked about watching Gavin Webster’s short set on this Edinburgh variety-style show was the way it had elements to suggest imminent derailment. Webster showed an interesting blend of comfort and mild danger, with a deceptively nonchalant delivery and carefree nature.

In this way, his style is similar to that of Tony Law: he gives the appearance of chaos whilst remaining entirely in control. The audience is lead to believe that he has run out of ideas or that the show hasn’t gone to plan. A mere few minutes into his Edinburgh Nights set, he announced: “I’m beginning to run out of material now,” which is the kind of thing that gets a big laugh but leaves an intriguing sense of anxiety in the air.

Webster is automatically likeable; he is a Geordie man of the people. His accent is wonderful (his own, and his impersonations) and he seems like a genuinely nice guy on stage: relatable and approachable.

Coincidentally, upon deciding that Gavin Webster was to be this month’s Comedian of the Month, my copy of the first edition of Stand & Deliver Mag (a post about of that will be up in the coming weeks) arrived with an article written by him within it. He wrote a brilliant piece about the roles within stand up comedy in today’s society and talked with true passion about a subject close to many of our hearts: genuine, clever comedy. Here, in 2014, we are surrounded by countless comedians: on television, in pubs, at art centres. Some, we follow on Twitter and others we pass in the street. They are everywhere and that is a fantastic thing but it is important that the passion and care for comedy by performers and audiences alike is kept alive.

JULY COMEDIAN OF THE MONTH