I wrote a post towards the end of July reflecting on the first episode of Noel Fielding’s Luxury Comedy: Tales from Painted Hawaii (series two) but this series has been so dense with artistic talent and clear passion, that I couldn’t possibly not revisit it after all five episodes.

It’s no secret that I am a massive fan of Noel Fielding and his work, so was obviously hugely excited that the long-anticipated second series had finally arrived. These episodes have taken a long time to produce because they are one of a kind; the process of making them seems to be more rigorous than that of various other Sitcom style shows. Love Luxury Comedy or hate it, it is impossible to deny that the makers of this show have presented their audience with great innovation: with the bright and complex animation from Nigel Coan; an eccentric soundtrack from Fielding and Kasabian‘s Serge Pizzorno; along with brilliantly intricate set and costume design from James Dillon and Ameena Kara Callender.

As well as the obvious beauty and detail involved in the visuals of Luxury Comedy, the stories are also packed full of references to art and literary culture such as Andy Warhol (of course), George Orwell and Yoko Ono. This alone is proof for me that the makers of Luxury Comedy have not been lazy during the creative process: every scene is punchy, a little bit mad, but also intelligent. 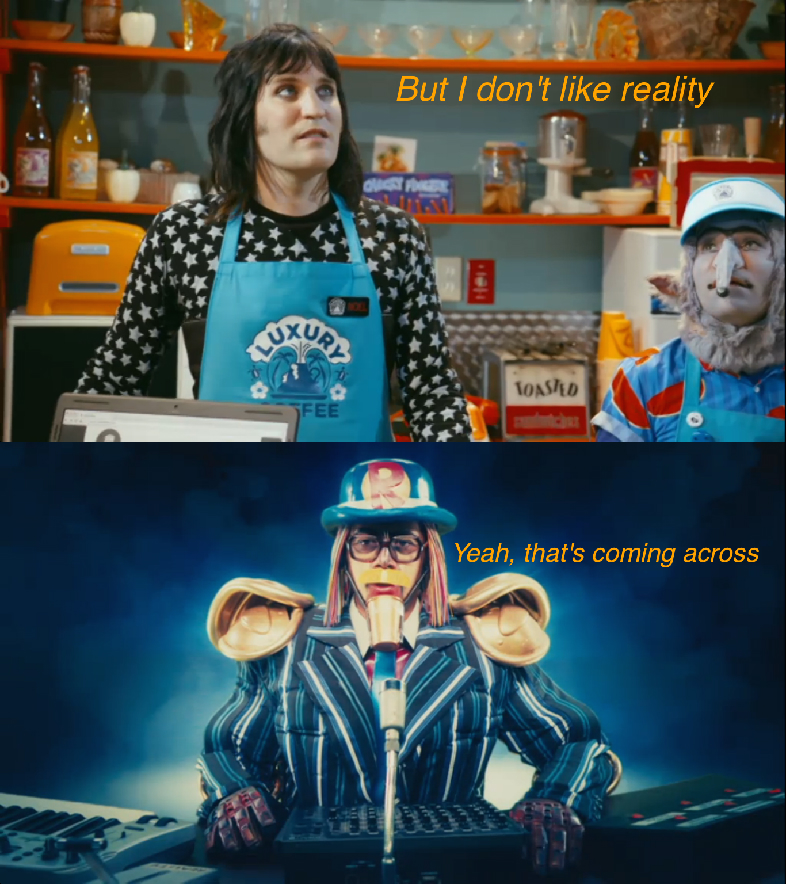 Watchers of series one who weren’t impressed may be pleased to know that this series is a lot more relatable for audiences, with occasional cynical statements that can catch you off guard.

Smooth: “What do you do to escape?”

In this way, I think this series is a lot more self-aware, in fact, one episode even focuses on the idea of the show only having one viewer (a Brummie named Terry, played by Steve Oram) and the fact that they must save him from certain death.

In addition to the lovely Noel, the show is full of immense comedic talents such as his Mighty Boosh co-stars (Dave Brown, Rich Fulcher, Richard Ayoade, Simon Farnaby and Tom Meeten) and of course, the delightful star of Doll & Em: Dolly Wells and Tom Meeten’s partner-in-crime: Steve Oram (Sightseers).

I would have to say that this programme is probably one of my favourites to ever appear on television, particularly this new series. It appeals to all of my interests: comedy, music and art (and Noel Fielding of course) but most importantly of all: Luxury Comedy is a source of inspiration to me. Every aspect screams quality and I sincerely hope the show and its creators flourish in the coming months as a result.

The whole of Noel Fielding’s Luxury Comedy: Tales From Painted Hawaii is available on 4OD.