One half of stand up and podcasting duo, Peacock & Gamble, Ray Peacock is mischievous, multi-layered and an expert storyteller. He has appeared on Russell Howard’s Good News and worked as a warm up for shows including Not Going Out and The IT Crowd. He has also recently become one of the favourite presenters of Fubar Radio, regularly working with comedians Ed Gamble and Angela Barnes. Ray will be performing his latest solo stand up show Here Comes Trouble to the Soho Theatre from the 2nd-4th April.

1) Is there too much stuff in the world?

There’s too much stuff in my house, let alone the world. I go a bit obsessive about stuff from time to time and collect things to the point of bursting. The most cathartic thing I’ve ever done was a massive eBay sale in January just gone where I got rid of sooooo much stuff. I basically made a list of stuff in my house that I could remember without seeing it and anything that didn’t make the list went on eBay- it was amazing. I’ve also gotten into a mood where anything that makes me sad is gone- so there were a fair few items purged that way too. I’d strongly advise everyone to do it- hugely freeing. Oh and I learned you can’t put animals on eBay- did you know that? Or people.

2) What’s the best thing about being in a double act?

I don’t even know if I am any more, I’ve not seen Ed since October! I think we both found at the Fringe last year that we felt a bit lost initially after sharing the Edinburgh stresses for three years on the bounce. The first night we went and had a coffee together and then parted to go to our respective shows- that was heart-breaking- just walking slowly in different directions. We both looked back. So that, I guess, just the company of it. Some of our best shows were when we were looking at each other on stage and smirking when audiences weren’t going for it. When you’re on your own there’s nobody to smirk at when the nights are a struggle. So, yeah, the company. And the sex natch. 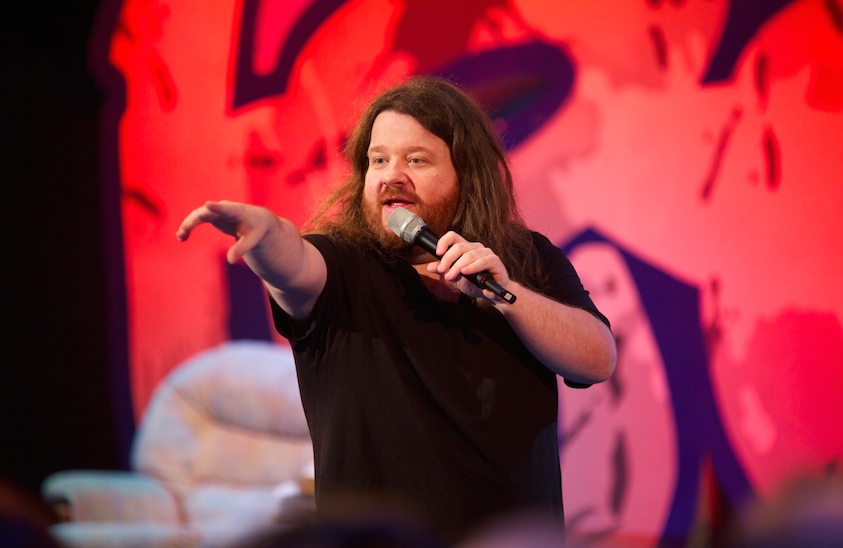 I get less and less inclined to punch people as I get older. I’m actually a bit more sinister than that, and at any given time I am plotting exhaustive revenge plans on plenty of folk who have crossed me. The last person I would have considered smacking was Jon Gaunt when he came onto Fubar and started attempting to chuck his weight around, but I managed to keep my cool for most of that as he got himself into a tizzie. He was demanding we were sacked (me and Ed) and all this nonsense, but it was a weird one because if he had done even a second of research on who he had picked a fight with then he would have seen that it might be a little more challenging than he anticipated. It was like he had gone into a boxing title match and not even watched a video of who he was up against. Which is always risky as you may get caught with a lethal uppercut and end up on your arse. Which is metaphorically what happened, and also a nice answer given your original question.

Not any more, over the last couple of years I’ve got a proper perspective on who and what is actually important to me and it turns out that I’d had all my loyalties in the wrong places- personally and professionally- so I was always worried about how certain situations might impact on other people. When this wasn’t repaid, I got myself to a point where I will literally shrug off anything nowadays, inevitability remains inevitable whether you worry or not. I am being hilarious in this interview don’t you think? I’d definitely go and see my show…

5) What’s your opinion on reality TV?

I was literally typing that I don’t watch it and then I realised that I watch The Undateables and I guess that’s reality TV right? I like that one. I won’t watch any of the Simon Cowell ones, or anything that is a competition. I find those ones very morally ambiguous and I lay the blame for increasingly rude and appallingly behaved live audiences firmly at Cowell’s feet. He has single-handedly authorised disrespectful and prickish audience behaviour to a point of Armageddon and come the revolution he should be first against the wall.

6) What makes comedy exciting for you?

In the last twelve months I’ve had an average running time on my tour show of 2hrs 15 mins (with an interval) – all just me. That’s the most exciting thing in the world to me just now, the idea that I am touring a show where I easily fill the whole thing for that length of time – it would have been unthinkable not long back, and it feels like such a huge achievement. I can remember panicking about filling an hour, and nowadays I panic about getting it down to an hour. At the Soho theatre run I am doing the original fringe show which is 60 mins and I honestly don’t know how that’s going to be possible. Maybe some of that worry is coming back now. No banter- no matter what. I don’t care what your job is.

No, I was busy misbehaving somewhere else. I almost certainly have the better story to tell.