Princes Of Main are a comedy sketch group made up of award winning comedians and writers Ben Pope, Alex MacKeith and Jamie Fraser. They also host a monthly free new material night in London called Crazy Science Stupid Magic, showcasing stand up, character and sketch comedy from a wide range of names on the UK comedy circuit. The Princes will also be returning to the Edinburgh Festival this year with another hour of absurd, fast-paced fun.

1) How did you feel when you woke up this morning?

BEN: Relieved. I watched Pride and Prejudice and Zombies last night and I had nine straight hours of premium nightmares.

ALEX: I felt neat and okay.

JAMIE: I have a wisdom tooth coming through so I woke up feeling achy, tender and like I was wearing a face two sizes too large for me. Other than that, tip top.

BEN: Jelly Babies are better than Jelly Beans. No question. But I’d still take Jelly Beans over an actual baby.

ALEX: Honestly, gutted that they’ve gone their separate ways because we three would often sit down for hours on a Monday knocking back alternate JBeans and JBabies (as we abbreviated them; we didn’t have time for the whole names — you wanna eat them, not say them!) If that’s the way it is I will abstain from both parties until they work it out. JBean/JBaby relations have frosted before and always thawed. It’s not worth falling out over. But I know exactly how Ben will feel about this, and I will not be the one to tell him.

JAMIE: Jelly Babies are fantastic, I wish I had some now. 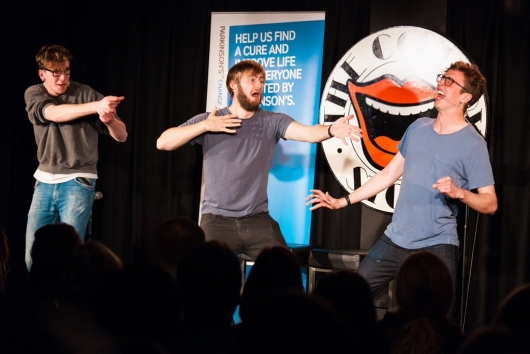 3) Do your sketches tend to develop or stay the same each time you perform them?

BEN: They always develop. We have short attention spans so too much repetition makes Jack a dull boy. New lines, new delivery, new voices constantly refresh old stuff or else it goes stale like milk or Kiefer Sutherland.

ALEX: They change considerably. You’ve got to change things up or Jamie gets incredibly, incredibly angry with you. If Ben had his way we’d hone and whittle until the sketch was just one syllable long. We actually cut the syllable-long sketch in the end because of time constraints. But I never have any regrets when we lose a line or a character or a joke. I’ve got them all right here.

*Points to head, then heart, then to notebook full of lines, characters and jokes.*

JAMIE: I think this has changed for us the more we have written and performed together. When we started out doing shows together, we had a sort of maniacal attitude to the actual writing of sketches, with very little left to be figured out in the moment. Call it being more relaxed or just laziness, but now we’re much happier to try a sketch with only vague idea of what might be funny about it, or even where it will go. From there, you see what gets a response and go back to the original idea, altering according to what felt best about it. That gradual erosion through the gentle lapping of positive and negative feedback eventually results in the sketch ossifying into a fixed state. If you’re lucky, this final frozen form is both Good and Funny and you can charge money for it at the Edinburgh Fringe Festival.

4) Who do you find the most annoying out of the three of you?

ALEX: Too much love.

JAMIE: I’d like to say something dramatic but it’s almost certainly going to be a prolonged John Donne-style malady.

6) What makes you feel as though you have your life together?

BEN: The split second when I wake up before I remember everything.

ALEX: I don’t know if you’ve heard of a little book called The Holy Bible?

7) What’s the best thing about your audiences?

BEN: The thing I love absolutely love the most about our audiences is that sometimes they turn up.

JAMIE: I wouldn’t want to generalise, but our shows are usually at their best when the audience enjoys seeing us mess up as much as they enjoy seeing us succeed. This is a lovely thing to experience as a performer and I’m grateful when it happens. Our audiences also tend to have an ineffable sexual charisma which makes them irresistible to friends, coworkers and strangers alike.

Tickets for Crazy Science Stupid Magic are available here. All proceeds go towards Parkinson’s UK. You can also follow Princes of Main on Twitter.