Summary: Howard decides he is going to become a writer in order to impress Mrs Gideon and the famous Hamilton Cork but is horrified to learn that Vince is already doing just that. Vince explains the basis of his Charlie books which receives dismissal from Howard: “That’s not a novel, that’s the scribblings of a retard”. Meanwhile, Bob Fossil has noticed a brilliant new way to make money from the Zoo: he is going to breed the ‘black-eyed Chinese people that eat sticks’ as this will attract visitors. Vince is bullied into dressing up as a panda and flirting with the female panda to get the male jealous. That evening, Dixon Bainbridge organises a writer’s party and Vince is invited but not Howard. Chaos quickly arises as Charlie decides to pay a personal visit to the gathering…

What Else? This episode made me learn that I want to be everything that Vince is; he’s the happiest kid at the Zoo. Naboo introduces the photograph of the kitten, Phillip, who helps calm Howard down in times of frustration and Vince shows off his poncho that makes him happy no matter what. The infamous “you know the black bits in bananas, are they tarantulas’ eggs?” scene is in this episode as well as the ‘Swear on Jagger’ joke. The brilliant Charlie song is played towards the end where the giant Hubba Bubba nightmare causes a scene. This episode is artistically very inspiring with heavy use of animation and great attention to detail (Dave Brown can be thanked for a lot of that, I expect).

Howard [to Vince]: “You’re always happy aren’t you. Everything’s fun. You see a peanut, the day’s off to a good start. You witness some soil, it’s a jamboree for Vince Noir. I need something more.”

Familiar Faces: Simon Farnaby as Simon McFarnaby (before the show) and Hamilton Cork (McFarnaby’s character in the show).

Summary: Ten years ago (well, technically twenty now) Tommy Nookah, previous owner of the Zoo, allegedly fell in the ocelot pit and died. Howard refuses to believe it and when Dixon Bainbridge, as the current owner, threatens to close the Zoo, it is clear that Howard must solve the mystery of Tommy’s disappearance once and for all. Vince and Howard work out that Tommy must be in the Jungle Room and set off in the hope of finding the calcium-faced midget. After hours of searching, Howard manages to find Tommy but he is old and his cheese eating habits are out of control (this bit always freaks me out as I have a stupid phobia of cheese). It is decided that they must grate Tommy’s head in order to save the Zoo: Tommy can help them, even in death.

What Else? This episode contains the brilliant: “We dream, but do we really dream?” sequence and also a mini instalment of: “Gather round, come closer, not you Fire!”. The Mod Wolves make a splendid appearance and delight us with the wonderful Mod Wolf Dance and we also hear one of my favourite crimps: Calm a Llama Down. The incredibly well-known Cheese song is in this episode. I love this little song but it gets so overplayed by people who haven’t ever seen the show so that irks me somewhat, so it’s nice to hear it in its natural habitat. We get to meet Rudy, the man who goes by many names and holds many tests, such as the Pipe Test (“many men would have taken the pipe…”). 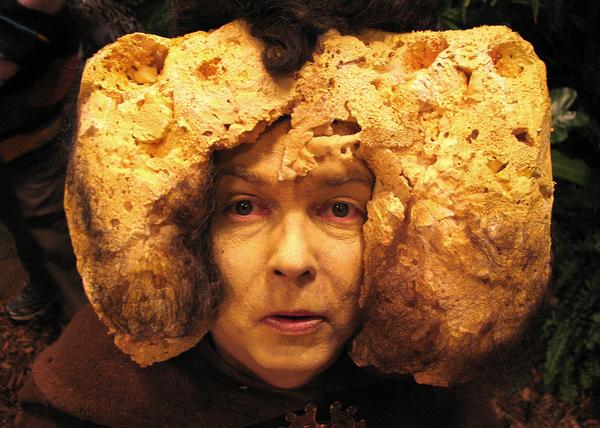 Tommy Nookah: “I have survived only by eating cheese, and as the saying goes: you are what you eat. And I’m freaking cheese!”

Familiar Faces: Rich Fulcher as Tommy Nookah and Dave Brown briefly as Fire. We also get to see Martin Trenaman as the locksmith.

Summary: This episode has elements from the Boosh’s beginnings as it used many ideas from the television pilot and one of the radio episodes. Dixon Bainbridge has just returned from his trip to the Tundra where he failed to successfully steal the Egg of Mantumbi and Howard is annoyed at the attention Bainbridge is getting because he didn’t actually do anything. Despite the fact that the last person to get near the egg was frozen by the ‘icy bastard’ that is The Black Frost, Howard and Vince decide to make an attempt and head out to the Tundra in Gary Numan’s private jet. While they are there, Vince is abducted by a giant polar bear and Howard is visited by one of the Parka People who takes him to the cave where the egg is (though the little man is taking him there to kill him, not help him).

What Else? This episode features the often forgotten song: the Stickleback Crimp, and also has the brilliant little scene where Bob Fossil is interviewing two cavemen-like people to be Howard and Vince’s replacements: they just point at things saying ‘Topshop’ constantly. The brilliant Tundra song comes from this episode as well; one of the few genuine songs from The Mighty Boosh that is more than a few lines long. Vince claims he is ‘like Mowgli, the retro version’ and Howard’s moustache is accused of being more of a ‘cappuccino stain’.

Howard: The wind is my only friend.

Wind: I haaaaaate you.

Familiar Faces: Dave Brown as The Black Frost and Bob Fossil’s replacements for Howard and Vince were played by Julian Barratt and Noel Fielding themselves.

Summary: There is a crisis at the Zooniverse: the animals, and even the quiet Joey Moose, have gradually been going missing and nobody knows who the culprit is (well, half of the staff haven’t even noticed). However, all hell breaks loose when Vince discovers that Bollo, too, has been snatched, as well as Mrs Gideon’s beloved python. The evil mastermind behind the trouble is the one and only Dixon Bainbridge who has been making mutants in his Secret Lab. Don’t worry, he has his reasoning: “Times have changed, zoos are over. You see a rhino, big deal. You see a wolf, who cares? You see a rhino with a wolf’s head- that’s a kind of twisted poetry”. His demands are getting out of hand as he orders Fossil to “get me a human person” and Howard is in severe danger of becoming a ‘mansnake’…

What Else? This episode features another one of Fossil’s iconic scenes, his quirky song: “Nicey nicey zoo zoo, for him and her, and me and you” as well as further development of Fossil’s inability to name the animals, for example, he refers to the elephant as the ‘grey leg faced man’. Howard demonstrates his brilliant skill for disguises, such as hiding behind a bunch of pink balloons: it’s true, he is a maverick.

Howard: “It’s very visually noisy, your face. It’s like a brass band under a wig”

Familiar Faces: Dave Brown as Joey Moose again, and more of Matt Berry’s Dixon Bainbridge. If you look closely, Dave Brown and Rich Fulcher can be picked out behind the mutant make up!