Ricky Gervais embarks on his first live tour in seven years, and with David Brent: Life On The Road being released in cinemas last summer, fans have been more eager than ever to hear more from the brain behind one of Britain’s most iconic sitcoms.

But first, audiences are treated to another familiar face from Life On The Road: Doc Brown. In the film, Doc plays rapper Dom Johnson who joins Brent on tour, and he also starred alongside the sales rep in the Comic Relief single Equality Street back in 2013. On stage however, Doc Brown is far more outspoken than his film counterpart. He has an air of refreshing calm in front of a crowd, yet is easily agitated and eager to justify his reasoning for having various hangups about his life.

Doc Brown gives off the impression of being a young spirit forced to live the life of a middle-aged man. Although presenting himself as a ‘nice guy’, a caring and socially involved person, there is humour in the resentment he feels regarding modern day responsibilities, particularly since he became a family man. Later, we are even treated to a rap, which, quite frankly, is what most of us had been most looking forward to.

When Ricky Gervais walks onto stage, he brings a buzz with him. He’s a 55 year old man in a black t shirt and jeans, sipping from a can of beer, but something about his demeanour makes him magnetising. The theme of the show is, unsurprisingly, humankind, and within this Gervais is able to explore topics such as evolution and speciesism. More specifically too, Ricky directs his fiery critical analysis onto particular aspects of celebrity culture and, later on, his concerns regarding bringing a child into the world given the current social climate.

As writer E. B. White famously said, ‘Analysing humour is like dissecting a frog…’. The long and short of it is that the frog inevitably dies. Gervais, on some scale, sets about to prove that this is not the case. Ricky uses his platform to explain the reasoning behind aspects of his comedy that have previously been met with heavy criticism and heated debate, but certainly not in an apologist sense. 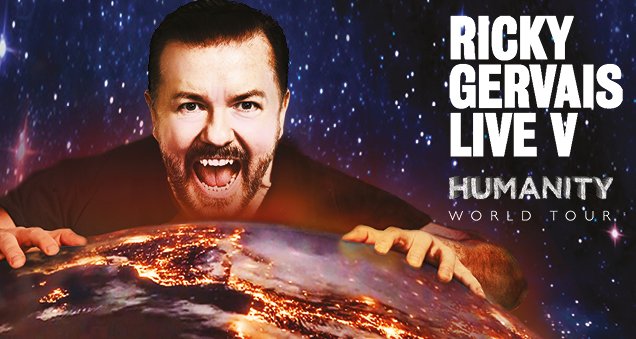 Gervais is well aware that his close-to-the-mark quips have been incredibly divisive in the past, from his Mel Gibson remark at the Golden Globes in 2010, to recent comments about Caitlyn Jenner’s realignment surgery and car crash in 2015 which resulted in the death of a woman. The latter incident, and Ricky’s bulletproof defence of his joke, features heavily in the show.

While admitting to his own faults and explaining where he has gone wrong in the past by causing genuine offence that he had not intended, Ricky proposes that often those who are offended by his material have merely misunderstood his point, or the issue he is discussing. He, like many of us, often despairs at 21st century society, as we are stifled by political correctness. Ricky criticises ineffective, emotive debate about things that only offend us because they’re about something we care about, as opposed to all the other offensive things that are happening in our world today, through exploring complex social issues like ‘dead naming’ and its links to transphobia.

But what I find most value in within Gervais’ comedy, despite the ingenuity of his reasoning and hilarity in the way he points the finger and laughs at himself, is that this comedian talks about the things that he loves and the people that mean most to him, as though his audience is being invited to a family get-together. There is something so endearingly pure about Ricky Gervais’ comedy. It shines through most in his material about his love for animals. It is with this topic that he starts the show and also how he ends it. His pleas with the audience to educate themselves on worldwide instances of animal cruelty (such as the Yulin Dog Festival) and charities that are working to bring these practices to an end is particularly poignant. Ricky has even chosen to donate all extra profit from the premium tickets sold for the Cardiff leg of the tour to Macmillan Cancer Support and The RSPCA.

Ricky Gervais is so humble, and yet he is a classic. Make sure to check your local tour venue for remaining tickets for the Humanity tour, as Gervais is back in full force.

DAVID BRENT: LIFE ON THE ROAD