A wonderful thing happened on BBC iPlayer on June the 1st: six comedy shorts were released exclusively online with input from many of the most brilliant people in comedy right now. This kind of thing is so vital for keeping comedy on television and online alive as we need to keep pushing the boundaries of comedy in order to keep it successful and influential.

Each comedy short is around five minutes long and they are all completely stand alone episodes (though it would be great if someone could pick them up for series in the future). My favourites were Micky Flanagan’s Foxageddon, Matt Berry in Lone Wolf and Bob Mortimer and Frankie Boyle’s Cookery Show mainly because of the comedians they involved, but I also thought Morgana Robinson’s impressions Channel M were wonderful, as always (her Amy Child impression is spot on).

I can imagine Micky Flanagan’s episode evolving into some kind of Lead Balloon–esque series in the near future as Flanagan’s comic delivery is very unique, which you’ll know if you’ve seen any of his stand up. His character here has the same comic voice as his stand up which I thought really aided the episode because there was less ground work that needed to be done to set the scene. The episode was funny because it is entirely stupid, which I guess is just refreshing for an audience who are used to satire etc. Also, the fact it featured Kerry Godliman (Derek) was a brilliant thing as I think she is very talented. 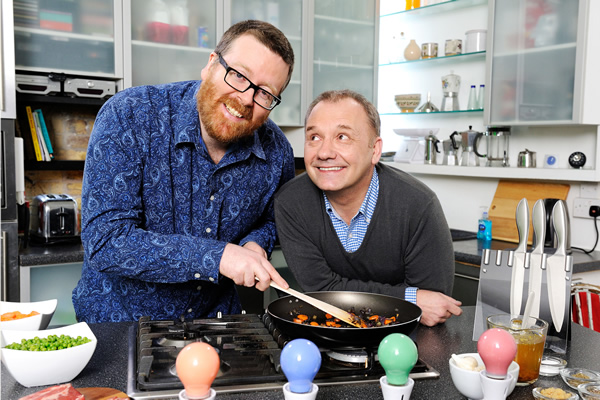 Bob Mortimer is a hero of mine and I was very looking forward to seeing what he could produce in a five minute time frame. I wasn’t disappointed; it was a whimsical, nonsensical cookery world and it was a beauty to watch, as Mortimer always is. I also noted that Bob was involved in almost all of the other comedy shorts: sometimes as producer and sometimes as writer and this proves what a clever, hardworking genius he is. It was also interesting to see Frankie Boyle playing a slightly different role, as a television presenter who hates peas:

“What is it, Frankie, is it the peas, or the thought that the knife might be on the brink of extinction?”

I can picture Frankie working on some kind of childrens’ show in the future and before watching this, I would never have thought so (for obvious reasons). I think Boyle and Mortimer are both incredible comedic talents, with an interesting partnership on screen and really hope something comes from this comedy short, as with many of the other episodes, but especially the cookery show.

I also love every show Matt Berry is involved with as the man is undeniably a fabulous comedic actor. Lone Wolf is an extremely funny mini-documentary that follows a wolf pack as they hunt their next meal but the voiceover is Berry-style: foulmouthed and hilarious. Again, I can see this making a fantastic feature in a sketch show or even a show on its own.

You can watch all the comedy shorts on BBC iPlayer here and I definitely recommend you do!