Rhys James and Adam Hess have been touring the country with their latest Edinburgh shows, bringing them eventually to the studio room at Birmingham’s Glee Club. The audience gathered is small but the atmosphere is good; improved certainly by the obvious strong friendship between the two comics performing. They live together, enjoy annoying each other and frequently refer to each other in their sets. Adam can even be seen sat on the floor in the corner of the room during Rhys’s performance.

Rhys James’s comedy is sillier than I anticipated it being. The impression I have always had of him is a rather cutting, almost condescending one, and his presence on stage comes as a surprise. With strange idiosyncrasies like the abbreviation of “high presh sitch,” as well as the flippant “soz”, James’s comedy is energetic, playful and enthusiastic. Amongst the impression of careful craft in terms of joke and narrative structure, Rhys has charming elements of impulsivity, referring to the four empty seats on the front row: “They come to all my gigs.”

An indicator of Rhys’s understanding of the craft is his own comment on his comedy. He seems to be very self aware and reflective, casting opinions on his actions within the narratives as well as the reactions his jokes receive in the room. This comedian is able to develop a believable narrative that encompasses detailed and obscure observations he has made without leaving the show disjointed; in fact, it is rather seamless. Rhys James’s latest hour is excellently written. He is cynical and analytical, whilst remaining endearing, with the show even getting quite emotional towards the end as the comic considers his next fifteen years of life. 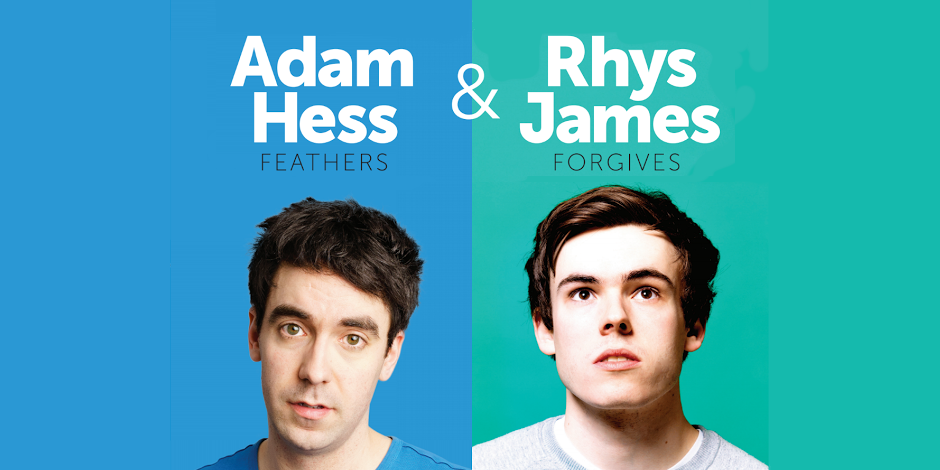 Now, it’s not difficult to believe that Adam Hess was the naughty kid at school. Hess seems to have retained this strange blend of pride and shame, paired with an innate sense of mischief that makes him a really likeable performer. The comic tumbles onto stage with a somewhat frantic energy that builds as the show progresses, his material getting stranger and stranger as he delves further into rather odd experiences from both his childhood and adulthood.

It seems as though Hess has had a tough year. His extravagant tale of recent efforts to make a banana split alone on Valentine’s Day at 2am is rather depressing. But his flailing desperation isn’t dampening of the mood, but rather bordering on hysterical. Adam knows he’s an object of pity according to this narrative, and plays it to his advantage. And if you let your mind wander for as little as one minute, you will jolt back to attention having missed a multitude of ideas that fly at his audience with impressive pace. His joke economy reflects his attention span, perhaps, and watching Adam perform has moments that are exhilarating.

It is interesting to consider the effect of social media presence on the stand up style of these two performers. Both shows are well-formed, with space for spur-of-the-moment audience interaction and callbacks where each comic rebounded off the enthusiasm the audience were already reflecting back. There are concise jokes and multi-layered scenarios, perfect for the Twitter generation and incredibly handy for keeping the energy up within live performance.