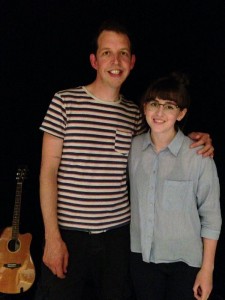 There’s something inspiring about attending a comedy show, which you have no prior information about other than a name, and discovering something quite remarkable. Witnessing a preview of Jonny Awsum’s second musical stand up show (at the MAC in Birmingham, of course) was certainly a unique experience, with the comic bringing boxes of mysterious objects on stage which were to be used throughout the hour, starting with three audience members on the front row who were supplied with plastic silver trumpets.

It is really no surprise that a large portion of his comedy work is in the form of being the ‘warm-up guy,’ or Hype Man as it is apparently called, for the energy Jonny managed to summon from a mixed-aged Thursday night crowd in Birmingham was admirable. One reason for the sustained high-octane feel of the show was that the audience as a whole were called to action regularly, whether that be to cheer performers on in their harmonica solos, shout back obscenities, or simply hum along to songs. Just because some of us weren’t picked on, it doesn’t mean that we weren’t a crucial part of the show.

The most applaudable aspect of Jonny Awsum’s performance was that no audience member was ever the butt of the joke, which made for unexpectedly enjoyable audience participation. Jonny enabled us to create something fantastic as a group and it unified us all as one; I chatted to people I’d never have mixed with in my daily life due to age and general background and that is a testament to this comedian’s positive attitude and the uplifting nature of his show as a whole.

Jonny Awsum’s latest musical extravaganza is magnificent: exciting and skilfully crafted. It seemed as though he didn’t even need to be doing previews at this point in late July, but the crowd were certainly pleased that he was. Musical, interactive comedy is not my preferred style of entertainment, but this show made it felt like it could be.

Jonny Awsum is currently performing his show Everything Is Awsum at the Edinburgh Festival.