The saying ‘write about what you know’ is a common tactic used in comedy writing, and this is particularly interesting, I think, when the viewer is not in position to relate to the subject matter. With regard to Motherland, which had a pilot on BBC iPlayer in 2016, and has since been picked up by BBC 2 for a six-part series, I was completely in the dark. I have only ever really appreciated motherhood and childcare from the perspective of the child.

Motherland  is co-written by Graham Linehan, Sharon Horgan, Helen Linehan and Holly Walsh. And the mothers they have written into this microcosmic world are by no means bad mothers. Their lives rotate around providing for their children, whether that be through doing the school run, organising birthday parties, or attending charity fundraisers. But in juggling the life of being a full-time parent and having a life and career for themselves, Julia and Liz (two mothers with completely opposing attitudes) often resort to somewhat unpalatable means. The selfishness is shocking at times, if arguably understandable, and it is this shock that is behind some of the funniest moments in this series. It serves as a relief, too, from the health anxiety nightmare that parenthood seems to be, from plaster-filled swimming pools to vomiting bugs. I’d rather them than me. 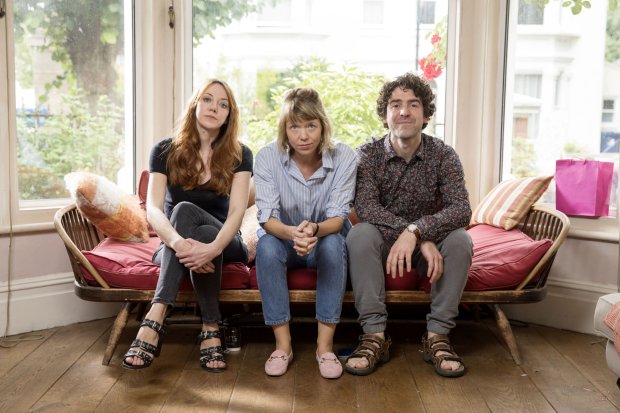 Liz, played by the inimitable Diane Morgan, is a favourite for me. She knows all the tricks of the trade with regard to dealing with other mums and their egos of various sizes. She is also relaxed enough to sit back and let her kids make their own fun, standing in stark contrast with Julia (played by Anna Maxwell-Martin) whose attempts to micromanage every aspect of her life leaves her neglecting communicating with her kids somewhat, as her day gets filled up with other things. Both tropes have their upsides and downsides, and Julia certainly provides the cringe factor; always saying the wrong thing, but not necessarily the thing the viewer might be thinking of.

There is a level of detail here, rarely seen in sitcoms these days it seems. It is a rarity that viewers are not treated as slightly stupid; we often have punchlines or scenarios spelt out for us. But the writers of Motherland have been far more clever here, leaving the space for us to think up the more obvious follow-up, and then providing us with a far further-afield, surreal turn of events. This is is comedy writing at its most nuanced.

Watching Motherland feels somewhat like how I imagine it feels to watch a car crash unfold. But this is disaster comedy that never takes the easy route.

CATCH UP WITH MOTHERLAND ON BBC IPLAYER