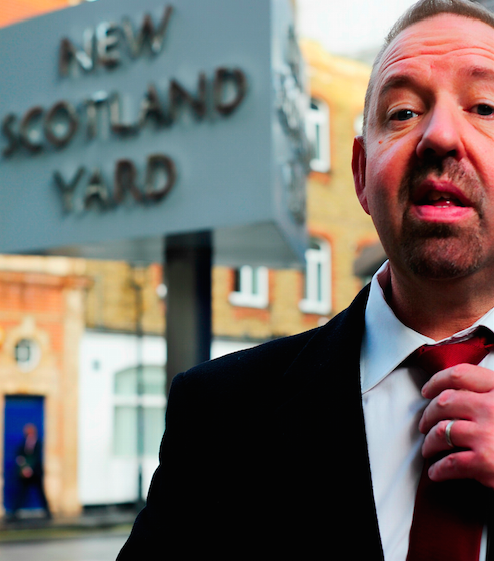 If you like your comedy shows to also be an educational experience, then Alfie Moore’s latest stand up hour A Fair Cop Stands Up may just be the show for you. Drawing upon his many years of experience as a policeman in Scunthorpe, Moore embarks on an hour of insightful observations and hilarious hypothetical problem solving. I caught a preview of the show at Birmingham’s MAC.

Alfie Moore arrived onstage armed with an abundance of facts and statistics which he delivered throughout the hour, using them as a springboard for jokes and anecdotes. There were occasional breathtaking moments of bitter sarcasm that gave the whole show a darker edge, such as Moore’s interjection regarding minority groups in the force: “we don’t allow people who are colourblind into the police force as they wouldn’t know who to stop search”. Other elements, however, remained endearing with the comic’s obvious nice character shining through, which served as an intriguing contrast against the shocking ironies of some of his lines.

Here we have a stand up who undeniably cares for his craft a great deal and the hours of work behind the material showed in the pages of notes he flicked through between segments. It felt at times that he was perhaps a little too eager to generalise ‘the public’ and our likes and dislikes, maybe this is a policeman’s trait, with some observational assumptions sneaking in as Alfie tried to tie his material together into a definitive narrative. I’m sure this is something he can work on over the coming weeks as the final parts of the show come together; it’s just a case of fine-tuning now.

Alfie Moore is currently performing preview shows of A Fair Cop Stands Up across the UK and will be taking the completed show to Edinburgh in August.