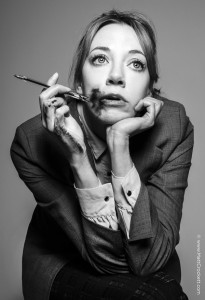 Diane Morgan is a face many will recognise, having starred in countless sitcoms such as Phoenix Nights and Uncle, being half of comedy double act Two Episodes of Mash with Joe Wilkinson and also performing stand up. But Diane is perhaps most well known for her hilarious role as Philomena Cunk on Charlie Brooker’s Weekly Wipe, where she explores various ‘moments of wonder’, such as “what is clocks?” and “where does your lap go when you stand up?” which are valid questions, I’m sure you can agree.

To find out more about the comedian behind the character, I asked Diane these seven questions…

Are you asking if I prefer things that go clockwise? Because most things do. I don’t know why. It’s none of my business. Hey, let’s try and get John Cleese to make Anti-Clockwise! (The sequel.)

2) How do you feel about the result of this year’s election?

I found it utterly unfathomable. The Tories are an absolute unmitigated disgrace of a party. An abomination. Deluded. Lacking in empathy and devoid of all humanity. Too much? I don’t think so. If I ever meet Cameron, Osborne or Ian Duncan Smith it will take all my strength not to kick them in the balls repeatedly.

Peter Cook. Now sadly no longer with us of course but if he was I’d gladly iron his newspapers before he read them, do his shopping and learn to make his favourite dish. I’d basically become his servant. I don’t think I’d impress him. I’d be too eager to please. It would be revolting.

The whole of my 20’s were wasted. I sat around staring into space a lot. I had a string of dead-end jobs. I went to drama school so I’m not qualified to do anything useful.

Most people waste their 20’s, it’s tradition. I do wish I could go back in time and shake myself. I didn’t start doing stand up until I was 28, although there was no way I could’ve done it before. Now, I feel sick if I waste a day watching videos on YouTube instead of writing.

5) Would you visit Mars if given the opportunity?

I would not visit Mars. There’s nothing up there! You can see that from down here! I can’t even be bothered to look at pictures of it in a book. Also, it’s asking for trouble. You’d probably need jabs and everything. Holidays are generally quite stressful and disappointing. So no thanks.

6) What is your favourite thing about performing as a comedy character?

It’s like wearing a suit of armour. Not literally of course. I mean you feel protected. You can pretty much say anything you like and get away with it because it isn’t you. It’s very freeing.

7) What stops you from being bored?

I’m never bored. Not now we have the Internet. I also have lots of funny friends and admin, and writing and food. I’m good at doing nothing too! (see question 4.) I can very easily just sit down in an empty room and not be bored. I’d make an excellent prisoner. I’d keep everyone’s morale up.