Drastic and outlandish, Sam Bain’s Ill Behaviour is a punchy comedic rollercoaster that follows Charlie (Tom Riley), who is recently diagnosed with a non-Hodgkin lymphoma, as his friends Joel (Chris Geere) and Tess (Jessica Regan) kidnap him in an attempt to forcefully administer his chemotherapy, which he had previously been refusing in favour of a more natural, homeopathic approach.

Recently divorced Joel, our main protagonist, wants to control everything; he needs everyone to play by his rules. Because in truth he is reluctant to accept change, and is very much against the thought of his long-term friends moving on in their lives without him. Joel’s character reeks of a need to keep things exactly how they are, so that he can feel stable, and there is something endearingly childish about that, making him likeable, if annoying from the offset. It’s easy to forget that the cast is so small, as the characters are big and loud, filling the space with noise. Sex addict Nadia (Lizzy Caplan) is a particularly complex character, adding an interesting tension within the group by introducing a romantic interest for more than one of the characters. 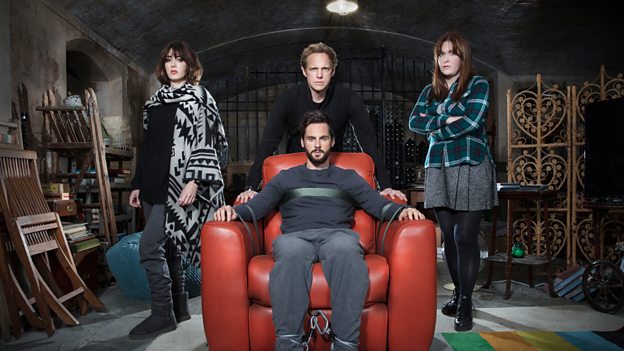 An upbeat tempo paired with a core dilemma that is obviously rather wretched makes for a series that soon evolves from being a punchy sitcom to being a fairly complicated and bleak drama. This bittersweet storyline soon begins to feel like a film rather than a series, which gives it more emotional impact as the narrative reaches its dramatic conclusion.

And Ill Behaviour raises interesting questions: is this rejection of medicine, whether by our trendy juicing diets or perhaps the human body’s eventual rejection antibiotics, for example, really the plight of the modern age? Luckily for now, the rejection of treatment is only a matter of opinion, and not a physical necessity, so Charlie’s health can still be saved if everything goes to plan. But this is a comedy, after all, so why would it all go to plan?

CATCH UP WITH ILL BEHAVIOUR ON BBC iPLAYER