Where? Just the Tonic at The Caves – Just the Big Room (Venue 88)

What are your feelings as you enter into this year’s Edinburgh Fringe season?

There’s definitely some fear and excitement bubbling under the surface, but I’m pretty chilled out about it. I’ve got a strong show, I get to go catch up with loads of friends, and I’m on nice and early everyday (1.30pm, that’s a comedian’s morning!) so I don’t have to spend all day stressing about my show.

I set out to convince everyone that Spain is the greatest country at everything (which it is). The show celebrates differences in cultures and nationalities but ultimately I’m looking to prove we’re all the same. Despite this lofty ambition and dull description, I’m definitely a ‘punchlines over premise’ guy. I tackle some pretty serious stuff from history and modern day but rest assured there are HILARIOUS gags throughout. There are a lot of surprises, I couldn’t decide if I wanted the show to be farcical or historical, and nobody expects the Spanish indecision.

What is the biggest obstacle you face(d) while putting this show together?

Probably Brexit. It’s changed audiences attitude to some jokes and it’s constantly looming over every comedy night. Thankfully I’ve performed my material to the most ardent leavers and the biggest advocates for remain and they all find it funny. I’m not 100% sure how I get away with a lot of what I say, sheer confidence I’m guessing. I barely mention it in the show but I have to address the elephant in room if just so everyone can breathe out and relax.

Has your attitude towards the Fringe changed at all in recent years?

Absolutely. I first went to the Fringe in 2011 with a split show and we all put so much pressure on ourselves. We thought Edinburgh was going to have a lasting impact on our stand-up for the rest of the year, everyones talking about reviews and agents and television and other ‘industry’ nonsense. Over time you realise that it’s not important or healthy to think about it that way.

Do what you feel comfortable doing, have fun, build an audience. The best feeling is having people return to see your show the next year, and the next. Do something you’re proud of. Ultimately none of it matters. It doesn’t make a difference if you skip a year. The Fringe is like bootcamp mixed with mardi gras. It’s a big old mess and I love it.

If there are any tickets left for it by the time this goes out, definitely go see Bec Hill’s new show. Her shows are always amazing and inventive but this year she’s putting on something truly huge that you will want to have seen.

Also, I’m directing Phil Cooper’s show. Phil is one of the most naturally funny people I’ve ever known and it’s been great working on Hamsters In Colour with him. He’s inherited a house in the Welsh Valleys from his grandfather, who was a hoarder, so the house is filled with decades worth of hilarity. It’s like a comedy time-capsule and Phil navigates it brilliantly.

Definitely take some risks though. Go see someone you’ve never heard of, if someone’s flyering their own show, be nice, take a flyer, if it sounds like something you might enjoy, give it a shot.

Where would you like to be in a year’s time?

I’d like to get some stand-up out on the radio, gig in places I haven’t been yet. I’ll keep putting out sketches with BBC Sesh. I think I’m going to put out an album of my comedy songs. Ultimately, just doing what I’m doing now. Despite the often miserable weather, the depressing politics and the terrible pay, there is nowhere I’d rather be than in the UK performing comedy. There’s no getting rid of me now.

GET YOUR TICKETS FOR IGNACIO LOPEZ: ‘ESPAŃYOLO’ HERE

Ignacio Lopez is a Spanish stand-up comic and MC currently based in Cardiff. MoodyComedy saw him acting as MC at Buffalo Comedy’s Christmas showcase, and he was undeniably the linchpin of the whole affair.

Lopez is a very playful comic who isn’t afraid to make brutal asides about members of the audience. He doesn’t even try to cover them with a fake gasp or a laugh or some kind of appeasement. He’s pretty reckless with it, but it is this that gives him his charm. Ignacio is so endearing that his audiences feel obliged to give him a free pass; we don’t care if he rips us apart on stage, because he’s bloody funny with it. 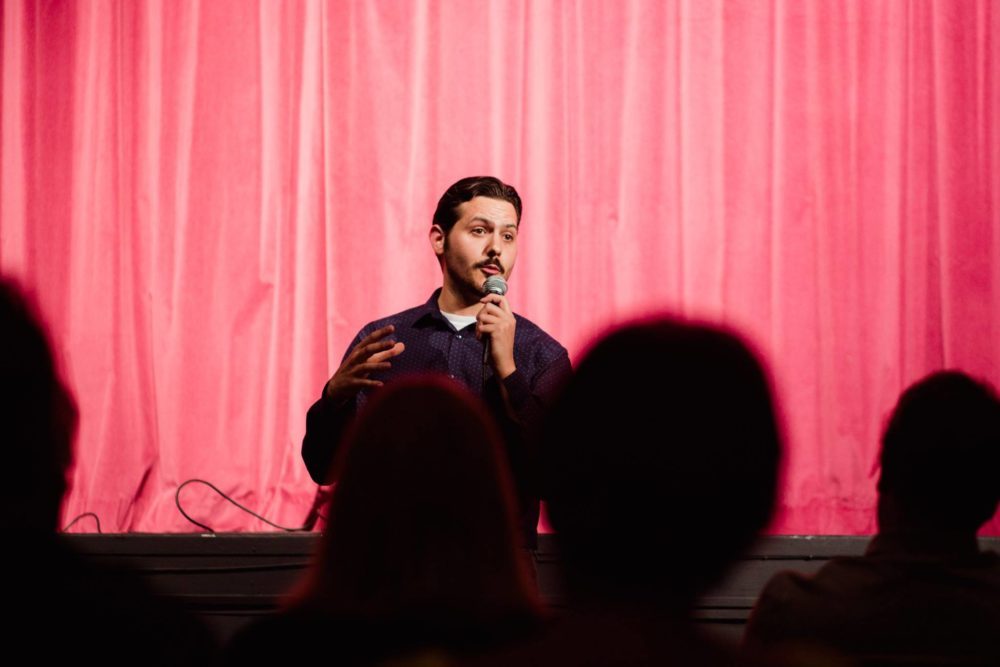 And paired with this affable demeanour, Ignacio has a distinguished ability to generate relevant anecdotes for his current audience, seemingly having something interesting to say about any topic or situation. This flexibility will stand him in good stead and no doubt he’ll be making an even bigger impression on the club circuit in years to come.

COMEDIAN OF THE MONTH