A beautiful new music hall has opened at the University of Birmingham, and with it, a great new monthly comedy event is born. I attended the venue’s second comedy night last Thursday and with such a gorgeous room and discounted prices, what more could you possibly need?

This show works on the basis that there are three acts: a compere, a first act, and a headline act. This time around, our compere was Kate Smurthwaite, a skilful comic who was quick to bounce off her audience and got to know us within minutes. She effortlessly brought us all together, in typical compere-style, by communicating with people of all ages and backgrounds, from all areas of the room. 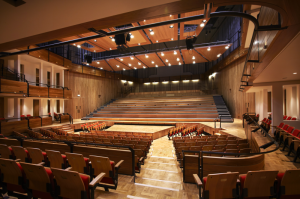 Next was Gary Delaney, a man who I think understands comedy really well; probably because he works with it on such a small scale, as a one-liner comic. It must be a difficult juggling act performing singular lines to an audience, but Gary was able to judge the room excellently and adjust his material to suit it. As well as the obvious ability to memorise such a vast amount of material, which is often timing and word-order dependent so incredibly easy to get wrong, Delaney also showed great skill at being able to think on his feet by linking jokes fluently and responding to the reactions of people in the crowd. I’d never seen a one-liner comic live before, and though I think I would struggle sitting through a whole hour of solid puns and word-play, I still thoroughly enjoyed the set.

Finally, it was time for Stephen Grant’s relatable and friendly style of comedy. This comic was fast and cynical but open and personable, who spoke confidently with the audience and clearly enjoyed being on the stage. He easily had us all on side which paved the way for some more dangerous material, and one of my favourite jokes of the night, which, with it being the day after bonfire night, inevitably involved terrorists. Needless to say, I’ll definitely be following Stephen’s comedy after seeing this set.

This night of comedy at the Bramall was great fun and I look forward to visiting again later in the year. If you live in or around Birmingham, I definitely recommend you check it out.